Pam recently performace with Julian and Jiaxin Lloyd Webber at the Wesley Centre in Malton on 15 June. She has recently been on tour with them on the Celebrity Silhouette, presenting their unique show in which Julian takes the audience on a historical and musical journey, giving valuable insights into his astonishing career, with musical accompaniment from his cellist wife, Jiaxin and pianist, Pam.

Pam also recently released several electro-acoustic tracks with Pete Lockett on The Other Songs label with their duo project,

Symphony of Pain's debut album, Hydeology, is available from Plastic Head. The album is also  available as a digital download from I Tunes, Amazon, etc. Visit the Symphony web site here.  The album was voted 'Best Album 2013' by ARFM rock radio listeners. 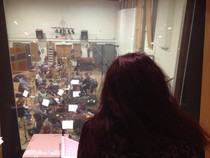 Pam recorded a string section at Abbey Road studios for a new Indian based project with Pete Lockett.  The recordings have now been released on Audio Network's website.  Here she is, watching it all develop from the control room.